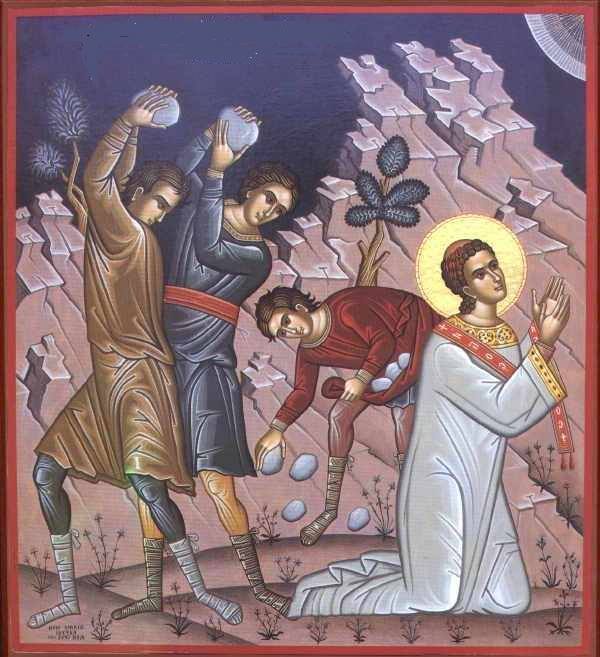 St. Stephen (d. c. 35) was the first deacon in what would become the Christian Church. He was most probably a Hellenistic Jew, he was one of the “the Seven” appointed by the Apostles to “serve Tables” in Jerusalem (Act 6). He also took part in the preaching and performed many miracles ( Book of Acts 6:8) thus incurring the hostility of the surround populace who accused him to the Sanhedrin.

Stephen delivered the great discourse reproduced in Act 7:2-53, setting out by a recapitulation of Israel’s history that God does not depend on the Temple, which he had been accused of blaspheming, and that Christ was the prophet announced by Moses, whom the People of Israel, under Pontius Pilate condemned to death. Incensed at his denunciations, his accusers had him stoned according to Mosaic Law, the witnesses laying their clothes at the feet of Saul, the future St. Paul, on whom Stephen’s death made a great impression. Stephen died confessing Christ and asking forgiveness for his persecutors, and was buried by “devout men” (Acts 8:2).

Stephen’s tomb was not known until later discover by a Priest (Lucian) in 415AD. St. Stephen’s Feast Day is traditionally celebrated on December 26 as the First Martyr of the Christian Faith from the end of the 4th century; an alternate Feast Day is now also celebrated as August 3 (commemorating the finding of his relics). A church was built in his honour outside the Damascus Gate by the Empress Eudocia in 455-60, the ruins of which were rediscovered by the Dominicans in 1882 and a new church was erected on the site.

St. Stephen was one of the most popular saints of the Mediaeval era, especially on the continent of Europe.