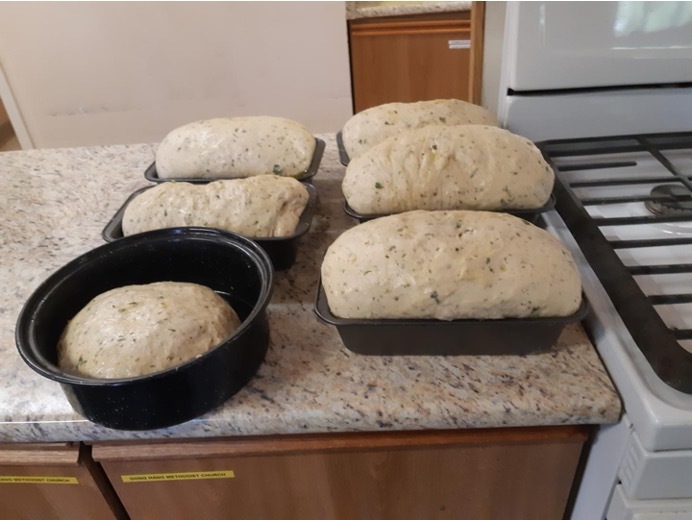 By Theresa Lum, our chef

This was the menu for our first community meal coming back from the COVID-19 shut down. It is salmon season, so this inspired me.  Okay, now the planning: how much fish should I buy? I had a giggle as the voice in my heart said five. Then I was in the kitchen taking an inventory of our pots and pans and I discovered there are five bread pans. So, the voice in my heart giggled again.

I am worried that our budget won't support the idea of sockeye, as my three native contacts I have for salmon fall through. I need to rethink the menu. So, I add the quinoa for protein.  Then I find wild-caught pinks for very cheap, and if I purchase only five, I can make it work; it will be close but, that voice says, don't worry. Then a large bag of quinoa is generously donated. I don't have a lot of experience with cooking quinoa in large amounts. The instructions say 1 cup raw will feed three, so that means I will need more then I have. I will cook the whole bag, and I think not everyone likes quinoa, so let's not worry.

I find my Herb Focaccia recipe and am pleased because I made this many years ago while being chef for Adduccis, and as I would put that bread in the outside ovens, I would say “here I go, stinking up the neighbourhood.” Well, I made two batches, forgetting that I had already doubled that recipe. Also, the bread rose like it never has before—I had five monster loaves and one round loaf. I still had dough but no more oven space, so I wrapped three large pieces and froze them for another time.

I was getting worried if would have enough food, but my heart would calm me whenever I thought that. I was given instruction: five fish and five loaves. If it can feed 5000, then the forty people that I am planning for will be fine. Even though there is so much excitement and talk of people bringing friends and neighbours to kick off the community meal ministry—what if it’s more than 40??  “DON’T WORRY-- you got five fish, five loaves, and me.”

The meal was a success!! We served it “family style” and each table was encouraged to pack up the leftovers on their table, and to scrape and stack the dishes in the bins provided. I was so pleased to have so many folks pack up leftovers to have another meal. The quinoa was more than enough, as well as everything else – there was more leftovers than I could have asked for or imagined there would be. So there was no need to worry!  We had 31 people, and one was only 3 months old: my “fresh from heaven” godson Koa (Koa will officially be baptized in our parish later this year).

I want to thank all the VOLUNTEERS!  Roxee who picked me and the groceries up and baked cookies; Elise, Paige, and Koa for peeling, washing, and chopping all the roots and leaves; Melissa for tossing and roasting all that prep and being my right hand and second brain. Esther for organizing all the “front of house” team that beautifully set the tables and made our hall such a welcoming place. The dishwashers who worked so hard: I appreciate you. We eat off of regular plates and silverware and had the serving dishes from eating family style! We are working towards organizing and implanting ways of doing things that won't be so taxing on anyone for too long a period. I am so grateful to all who came to share your time and to have the sound or your laughter and my favorite sound: people enjoying good food. I look forward to cooking for you all again on October 19.